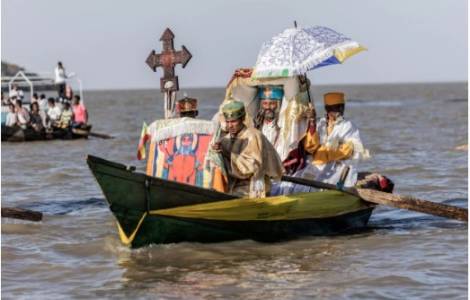 Addis Ababa (Agenzia Fides) – The celebrations of the Orthodox Epiphany, locally known as Timkat, began on Wednesday afternoon, January 19. According to tradition, worshipers set sail on Lake Ziway in motorboats, canoes, and kayaks made out of papyrus stalks. The priests, flanked with clergy in red, gold, white, and gold, set off from five monasteries on the lake’s promontories.
The lake is located 120 kilometers south from Addis Ababa. It is the centre of the annual celebrations for the baptism of Christ. This is one of the holiest days on the Ethiopian Orthodox calendar.
The priests arrived at Lake Ziway carrying tabots, which were replicas of the Covenant tablets, on which Christians believe the Ten Commandments given by Moses were engraved. They were accompanied by boats loaded with crosses and other icons.
The devotees, dressed in white from head and toe, gathered in every boat that was available, even the traditional tankwa, which are made from papyrus.
After the procession reached the shore of the lake, also known as Tembel, the celebration began. It included singing, drumming, bells, and horns before an all-night prayer vigil.
The priests returned to the lake on Thursday, January 20, to bless the water as well as the faithful. Some jumped directly into the water, while others preferred to play in the shallows. (AP) (Agenzia Fides, 24/1/2023)

CHAN 2022: Mali-Mauritania, a derby for a place in the quarter, Cameroon has its destiny in hand