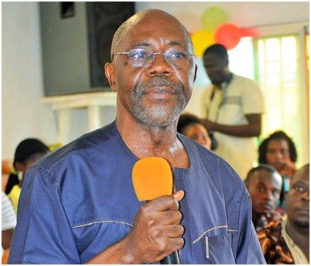 By Mark B. Dumbar Jr

Fofana made the statement after a recent interview on Truth FM Breakfast Show.

He stated that the party was ready to make sure that the necessary changes are made in the district.

The 12 district Aspirant stated that George B. Samah, currently the legislator, is determined to rescue the district.

Fofana said that his political agenda focuses on advocacy for betterment of the District.

He stated that twenty-four communities have been created by the consent of the residents of the area.

Fofana has promised that he will be diligent, sincere, and committed when he wins the Presidential and Legislative Elections.

Representative Aspirant stated that residents in the district are losing faith in their current legislators.

He mentioned the widespread crimes in the area and the fact that Representative Samah has not done anything to address the problem.

This profession has been around for over 20 years. He has worked for many international media outlets  including: West Africa Magazine, Africa Week Magazine, African Observer and  did occasional reporting for CNN, BBC World Service, Sunday Times, NPR, Radio Deutchewells, Radio Netherlands. He is currently the correspondent for Reuters
He holds first  MA with honors in International  Relations and a  candidate for second master in International Peace studies and Conflict  Resolution from the University of Liberia.