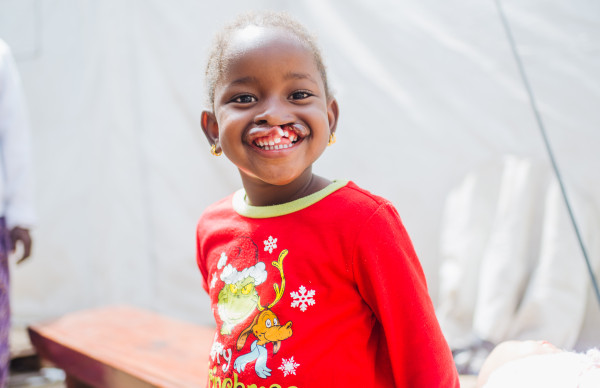 An uncle’s dying wish has been granted with his niece receiving transformative surgery from a medical charity.

Awa was born with a cleft palate and lip in a remote village in southern Senegal. Her mother Rougui was worried about her future.

But Rougui’s supportive brother Woury invited his sister and her family to stay with him during this difficult time and sought a way to find his niece healing.

Awa was forced to live with the birth defect in her village as she grew older.

Rougui said: “People in my village did not cast her out, but they laughed at her, and she was ashamed. They would say ‘look at how your mouth and lip are’, which made her embarrassed. She used to hide her mouth with her hand.”

Her uncle Woury became even stronger in his determination to help her.

Woury was thrilled to hear that Mercy Ships, an international charity dedicated to providing free medical training and surgeries, was bringing a ship to Dakar.

He told Rougui: “Run, run, run to Dakar! These people will help her smile and fix her smile. People will not even recognise Awa after!”

However, surgeries were canceled soon after the pandemic. Her uncle kept in touch avec Mercy Ships, determined to ensure Awa had surgery, and to encourage Rougui not to give up on her healing.

Woury was tragically killed just a few weeks before Mercy Ships return to Senegal in the early 2022.

But Rougui decided to honour her brother’s last wish and she and Awa, now five, made the long journey to the Africa Mercy, where Woury’s dream was finally realised and Awa received successful surgery.

She said: “On the day of our discharge from the Africa Mercy, I thought of many things. Awa and me left a hospital the last time we were together. It was the day she was born. She had a cleft lip. Everything is different now. We are now able to go home together, she is healed, and we have been well taken care of. It is a great joy, this day!”

Soon they made the long journey back home, where Awa’s father was awaiting them with a big smile.

When he saw his daughter, he was overcome with tears and said a few words of thanks to his brother-in law.

He said: “If her uncle Woury would have been alive and he had seen her now, he would have been so happy. He would affirm that God did what he hoped for. And he would spend the rest of the day playing with Awa.”

Distributed by APO Group in support of Mercy Ships

About Mercy Ships
Global health has been focusing on individual diseases for the past two decades, while low-resource countries have not given surgical care the attention it deserves. Nearly 17 million people die each year due to lack of surgical care.

Mercy Ships (www.MercyShips.orgInternational faith-based organisation that operates hospital ships. It provides free, world-class medical services, medical capacity building, health system strengthening, and other support to those without access to safe surgical treatment. Mercy Ships has been active in more than 55 countries. The last three decades of its existence have been focused on partnerships with African nations. Each year, volunteer professionals from over 60 countries serve on board the world’s two largest non-governmental hospital ships, the Africa Mercy® and the Global Mercy™. Surgeons, dentists and nurses, as well as health trainers, cooks, engineers and chefs, all volunteer their time to support the cause. Mercy Ships has offices across 16 countries and an Africa Bureau. MercyShips.org has more information. Follow MercyShips @ Social Media.

Rundu duo set to drop ‘Ka_Feeling’ on Valentine’s – The Namibian