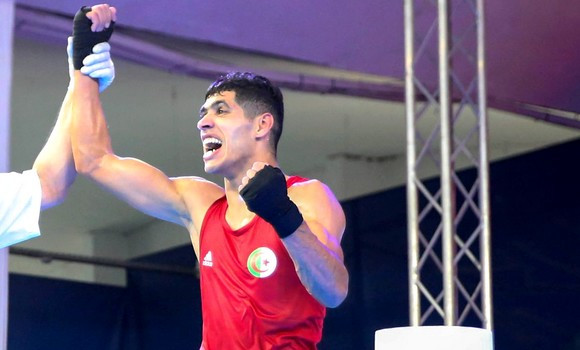 Jugurtha Ait Bekka:Jugurtha Ait Begka is my name and I am 26 years. I am an Algerian fighter in the category of less then 67 kilograms. I was crowned double African champion after winning a gold medal in the African Games and another at the Mediterranean Games.

You were crowned African champion under 67kg category in Mozambique a few days back. How did you feel this moment?

It’s always a good idea to win a new title. It’s a great start to my other goals. I will then continue with international competitions. Before arriving in Paris in 2024 in the best conditions, I will continue with the World Championships and African Games.

Can you tell us about the fights you had during these African Championships, up to the final against Ngeumaleu Patrick from Cameroon?

I took over Shaft Mwandwe, the Zambian boxer, in the quarter-finals following the draw. I won the fight (5-0). It was difficult to win the first fight. It is always difficult to box under different conditions. Omar Elsayed from Egypt was unable to enter the ring in the semifinals. I don’t know why he withdrew. I fought Ngeumaleu Patrick, a Cameroonian boxer. He is a professional fighter who trains in France. I tried my best to win the duel. I won the gold medal because of the experience and the support from my coaches. Hamdoulah.

This competition has not been won by only one Algerian. Algeria came first in the team category. How can you explain this result?

It is the culmination of a lot more work and effort. There is a lot of pain involved in the preparation of boxers. We were conscious of the responsibility we had in these 2022 African Championships. Each boxer must focus on his individual mission before he can think about the collective reward. It is an obligation. This is how an athelete can honor his country, the wilaya (district editor’s note), and his commune, as well as his family. You won a medal. We have given everything.

Also, the coaches deserve to be thanked. They have set up a schedule for us to prepare just after the rest of the Mediterranean Games (June 25, 2022 – July 5, 2022). We were quite short of time because the African Championships came so quickly. We were prepared for this amazing event. This is how we won the first place team.

“My main objective is to qualify for the Paris Olympics”

How did you prepare to attend this meeting?

We spent eight months training for the Mediterranean Games. After a period of rest, the boxers returned to their families. After this important meeting, the Algerian Boxing Federation called for us to join them for a 12-day gathering at Annaba (city, eastern Algeria, editor’s notice) in preparation for the African Championships. The coaches then selected the athletes who would be participating in the competition. We then had a very competitive 2nd grouping. We prepared for all aspects, both tactically and physically. We had a great program with sparring partners.

What are your next steps after you have won the gold medal at the African Championships as well as the Mediterranean Games gold medal?

My main goal is to be able to compete in the Paris Olympics. This is why I train every day. These deadlines are steps towards 2024 readiness. This is the goal of all athletes, and not just Algerians.

For a few more years, Algerian boxing has seen its colors return. Two years after the Paris Olympics, this is a good sign. Is Algeria in the running for a medal in your discipline, or is it too late?

The Olympic Games represent the highest level of competition. This competition is attended by the top athletes around the globe. We believe in our chance. It is possible to win medals with the same effort as other nations, but it takes a lot more preparation. Over the next two-years, many sacrifices will need to be made. The athlete must set a goal and stick to it. As tournaments and competitions progress, we become better. We will need to be competitive.

God willing, we will do our best in the ring. This type of event requires a lot confidence. The Olympics is a big deal for athletes, and it will be down to the details.

What are your personal preparations for international deadlines?

My preparation is never ending, as it is with most top athletes. I am a national military boxer and take this opportunity to meet my coaches Sid Ahmed Merouane and Brahim Bedjaoui. Because we have long-term and medium-term goals, our preparation is ongoing.

The African Champions received a 10,000 dollar bonus. This is a great financial reward for boxers. Are there other sources of income than just rewards? Can an Algerian boxer make a living from his sport?

While I cannot speak for others, I am an employee. We get bonuses during competitions. We also receive bonuses through the Ministry of Youth and Sports.

Icelanders lose second round against PG – The Namibian