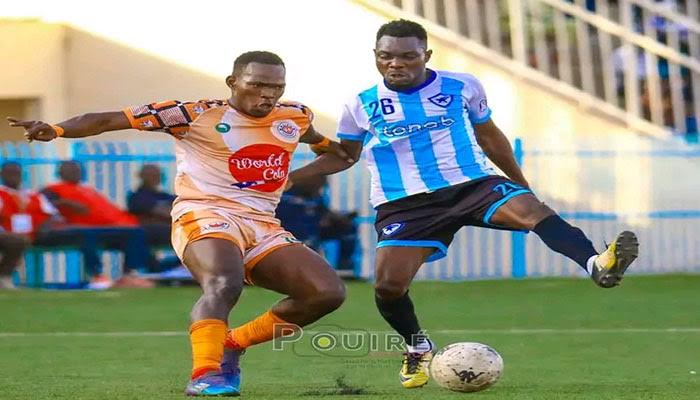 Despite their draw against AS Police, AS Douanes remains top of the league at 17 days of Ligue 1. The Gabelous of AS Douanes are closely followed by Colombes of Salitas FC who won their duel against Étoile Finale of Ouagadougou (EFO), 1-0. Racing Club de Bobo (RCK) defeated ASECK 4-2.

Real du Faso was able to get back on track with a logical win (1-0) over the USFA. Sixth defeat in the last seven games of the Étoile Finale de Ouagadougou (EFO), which lost 1-0 on the lawn of the Municipal Issoufou Joseph Conombo stadium against Salitas FC. The queen of stadiums finds itself in the red zone and is ranked 15th in standings. The Rail Club of Kadiogo, (RCK), had a successful operation thanks to its 1-0 victory at home against Majestic SC. It moved up to 3rd in the standings.

AS Police 1-1 AS Customs

Morocco (J.14), Wydad seized the opportunity to meet the leader

After Raja’s victories against the leader,AS FAR(1-0) Saturday – Zakaria El habti scored the goal. Wydad Casablanca had an opportunity to go back to the miliaries. The Red and Whites didn’t miss one another. They dominated JS Salmi (1-0), thanks to Ayman El Hashouni’s 52nd place finish. They beat the promoted to score 28 points in fourteen days, the same as the leader AS FAR. However, the Rbatis still have a better goal differential.

Raja is the other team that has benefited from this day. The Greens, who have won four consecutive victories, are now at 26 points. They are tied with FUS but have a better goal difference.

The FUS of Rabat lost at home against Moghreb Tetouan in the other matches. Kamal (17′ & 72′) carried the White Dove, before Mehdi El Bassil reduced FUS’s mark (91′).

Olympique Club Khouribga and Ittihad Riyadi de Tanger (IRT), continue their poor run. Both teams lost to Olympique Club Safi (0-1) and Chabab Mohammedia (0-1). They have not won a match for 14 days. The RS Berkane has had two wins, but is now 8th and six lengths behind the 4e square.

Moghreb of Fez 1-1 Hassania of Agadir

This weekend saw the matches of the 13th day in the Togolese first-division football championship (D1) played. ASKO de Kara is still the leader after its win against AS Togo Port (1-0). After two defeats in a row, the ASCK revived at the municipal stadium of Sokodé against Semassi FC (1-0) while Dyto FC won 2-1 ahead of Gbohloe-Su.
AS Binah drew (1-1) against Unisport FC of Sokodé. After their victory against Gomido FC during the 12th day, Sara FC of Bafilo fell against Entente II of Lomé (1-0). Kakadl FC, Tambo FC, and AS OTR (3-3), each conceded a draw to Espoir FC de Zio (1-1), and AS OTR (3-3).
A.G

Results for the 13th Day

AS Kigali won easily against Marines (3-0 16th day) in its first match of the secondleg to consolidate its first place in Primus League. The goals of this Kigali Town Hall team were scored by Félix Kone Lottin (27th), Jacques Tuyisenge (85th) and Hussein Shaban (94th).

Gasogi United (0-0), held the check of Kiyovu Sport (second in the first section)

The Marines, Espoir clubs and Espoir clubs are at the bottom. They missed the beginning of the return phase. They are now six points clear of Rwamagana city, the first player not to be relegated.

Burundi (J.16), Bumamuru opens the return phase after a victory

Bumamuru, the champion of the first phase started the return phase with victory. The team from the west of Burundi won against Musongati in Gitega (1-2, 16th days). Shassir Nahimana scored from a free goal to score the winning goal. It was a great operation for the club that wants to win the championship. The battle will be tough since Vital’o and Flambeau du Center, the second and third place winners, respectively, won.

Three teams are currently at the bottom in the standings. Namely Tigre Noir, Athlético New Oil and Burundi Sport Dynamique who lost their first matches of the return phase.

Buja City 1-3 Torch of The Center