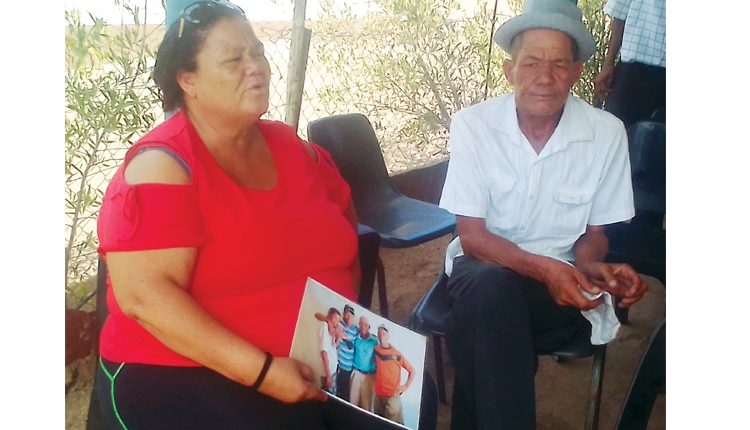 ‘Our son did not deserve a violent death’ – The Namibian

“MY son was full of vitality, helpful and a people’s person. He did not like violence so his lifestyle was not one of “eye for an eye” or “tooth for tooth”.

So says Veronica Plaatjie, the mother of Elleste ‘Speedy’ Plaatjie (31), who was allegedly fatally assaulted a week and a half ago at Krönlein at Keetmans-hoop by two members of the police’s Special Reserve Force.

Mulisa Bernard (30), and Wilbard Nshuku (25), were both accused of being members of the Special Reserve Force. They appeared before the Keetmanshoop Magistrate’s Court.

Their case was moved to January 30th to allow for further investigation and to obtain legal representations.

Bernard and Neshuku will both be able to apply at that time for bail.

They appeared before magistrate Lischen Kongore, while Lewis Chikunwe, prosecutor for the state, appeared for them.

According to the police’s report on the incident, the officers were on patrol at Krönlein when they came across Elleste and his friends and searched them.

Elleste was reportedly found to be in possession of cannabis and was then beaten down by the officers.

His death certificate states the immediate cause of his death was “superficial injuries involving multiple body regions due to assault by being struck by a blunt object”.

“My son came running home that afternoon when he was assaulted. I reprimanded him for not having taken his epilepsy medication. I then saw his face, and asked him about it.

“You know the police made them run in front of the vehicle like animals and were chasing them with the vehicle after dropping them off.

“My son was naughty, but a peaceful person. Even when he was drunk, we would call police and go over night at the station. He had friends in the police, but would never clash with the law intentionally,” his mother said yesterday.

Norman Plaatjie’s father described Elleste as his right-hand person, a peaceful individual who was everyone’s friend.

“If I needed anything, the person to call was Speedy,” he said.

He stated that the family would like all officers involved in the alleged assault to be charged.

“Before my son died, he said to me, ‘Daddy, light me a cigarette’. He then said, ‘Daddy they’re five that beat me’. Those were his final words to me. So why were only 2 people arrested? What about the rest?” his father ask.

Veronica said: “They were eight in that bus. Why didn’t the beating stop? If you saw it and did not stop it, then you are a complicit. Therefore, we want all eight officers who were in that combi that day to be arrested.”

Yesterday, a group of shocked community members led by the Namibia Economic Freedom Fighters took to the streets to demand that bail not be granted.

NEFF activist Michael Amushelelo said: “Those police officers clearly have no regard for our Constitution, which guarantees life, those fundamental human rights and freedom. They are supposed to serve and protect us, but they are actually killing us lately.

“I myself am a victim of police brutality. Police brutality should be condemned. The purpose of the uniform is to serve and not to dominate.

“If we do not stand up and protest and let the police know their acts are unacceptable, these acts will occur unabated, and our people will suffer.”

The Keetmanshoop youth wing of Landless Peoples Movement (LPM), is calling for a civil suit against the accused.

“Our heartfelt condolences to the family of Speedy as we knew him. We promise to stand with you and fight justice. The perpetrators must be brought to justice. This cannot and will not go unchallenged,” she said.