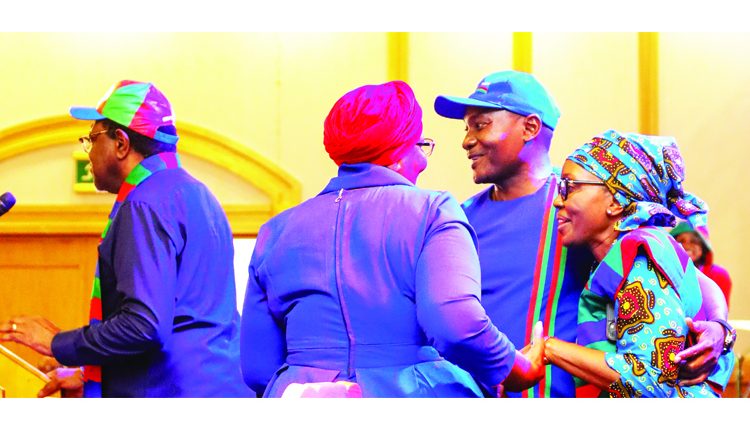 Analysts hailed the congress that elected Netumbo Nandi Ndaitwah, the Swapo vice president, as the party’s next president candidate for the 2024 elections.

However, this could be marred by alleged electoral irregularities that could haunt ruling party.

Some delegates are suspicious that Swapo central Committee members included people who weren’t supposed to be on the list.

Sources say that these could lead to court challenges.

She defeated Saara Kuugongelwa–Amadhila, prime minister, and minister of environment and forestry and tourism Pohamba Schifeta.

Nandi-Ndaitwah received 491 votes, Kuugongelwa-Amadhila got 270 votes, and Pohamba Shifeta got 91.

Uahekua Hisunga, who ran for the position of deputy secretary general, received 363 votes, Evelyn Nawases–Taayele got 326, and David Hamutenya 92 votes.

“I would like to tell her that her task lying ahead is heavy. Yours truly is just standing in, there will be a congress before 2024 to formally give the wheel to make you to take over my position,” he said.

Geingob, the president of the ruling party, was re-elected at yesterday’s congress.

Yesterday, the president attempted to portray a united party leadership despite a bruising campaign which included name calling.

Nandi-Ndaitwah’s group was code-named “Old Mutual” in reference to her age.

Geingob called the lost candidates onto the stage and encouraged them to share a hug.

He condemned The Namibian’s headline yesterday, which stated that the ruling party’s congress had been rocked by chaos.

Sources familiar with the voting process have described the election process as “highly irregular”.

He stated that the congress had approved the voter’s credentials.

“We were only given the list. The one concern that was there was that a man appeared on a female list and vice versa,” he said.

Mathe stated that delegates without ID cards must complete forms.

“If you don’t have an ID, then we can accept a driving licence. In some cases, candidates may have lost their ID cards. I know of one instance. She went to make an affidavit and we accepted,” he said.

Mathe stated that the party’s zebra style rule allowed election officials to remove Nawases and Tayele from the race.

“The rules make it clear that the top four should have a balance between men and women,” he said.

Yesterday Kuugongelwa Amadhila was informed that the elections were democratic Swapo processes.

“Swapo discharged another mandate with distinction. We have managed a congress that meets international standards. That’s what we came here for. It was not about personalities. Swapo won,” she told New Era after the congress.

Obeth Kandjoze, an ex-mining minister and member of the politburo, led her campaign.

Yesterday Shaningwa told New Era that her re-election proves she is trusted by the electorate.

Frans Kapofi the Minister of Defence and Veterans Affairs, who pulled out of the race in September, said yesterday that Nandi-Ndaitwah’s victory is no surprise.

“It is obvious. You are dealing with people who have different kinds of backgrounds and experiences in politics, and that is what you get,” he said.

Kapofi denied that Nandi-Ndaitwah won because of Ohangwena’s dominance.

“There is no such thing,” he said.

Kapofi stated that Nandi-Ndaitwah is the age that brings the wisdom that the party needs.

Ephraim Nekongo (the youth league secretary of the party) stressed unity and told the other candidates to move forward.

“What is important now is for us to unite as a party and move on so that we come to 2024 to see how we mobilise the masses.

“We have provided the first woman president, and it is now up to other women,” he said.

Swapo chief whip Hambyuka Hamunyera told the losing candidates there will be “another time” for them.

Hamunyera, also an election observer, stated that polling stations were closed at 22:22 on Sunday, and that vote counting began at 02:15 yesterday.

He described the process to be difficult and long.

“But we faced those challenges and we are here,” he said.

The chief whip stated they wanted a female president to make some improvements.

Hamunyera stated that the Kavango East, West and West regions helped Nandi–Ndaitwah to win and Shaningwa to win.

Lucia Witbooi (Swapo lawmaker), who supported Nandi–Ndaitwah yesterday said that she has been working towards this result since last January.

“I didn’t start yesterday,” she said.

Witbooi insisted on her decision to withdraw from the race for deputy secretary general, and denied that it was done to make way for male candidates.

Witbooi made clear that it was the party’s responsibility for winning back the south, which is dominated currently by the Landless People’s Movement.

“It is not a Lucia thing alone. It is the responsibility of all of us – from the section leaders, branch, district, regional and national leadership to make sure and to work hard to make sure the south and all the regions we have lost . . . “ she said.

Graham Hopwood, a political analyst, says that the overwhelming support for Shaningwa and Nandi-Ndaitwah should allow the party to unite behind them.

“Under Ndaitwah the party will have a credible leader to put forward at the 2024 elections, one that could stabilise the party’s vote or even enable a rebound,” he says.

Hopwood believes being the anti-corruption nominee was the best card for Nandi – Ndaitwah.

“I think this helped her to stand out from the other candidates,” Hopwood says.

He said that Swapo’s second breathe could depend on how the party handles the shift in power.