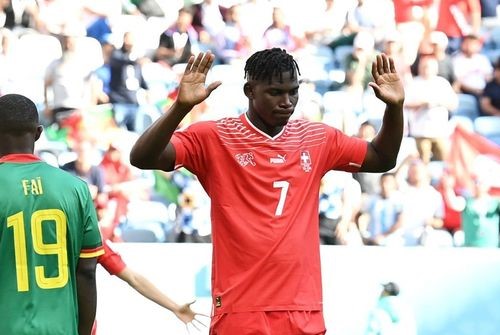 Another disappointment for an African team. Cameroon lost (1-0) to Switzerland in Group G. Breel Embolo, born in Yaoundé, scored the only goal of the game.

Doha-Breel Embolo had been the most watched player in the world before the match against Cameroon. It’s not because it is the star of Switzerland. Not because it’s the striker. NationalCameroonian by blood, Embolo is also Cameroonian. Embolo was born in Yaoundé before flying to Switzerland thanks to one of his uncles. He also lives with his parents and is a member of the Indomitable Lions.

Embolo “betrayed his people” on Thursday, November 24. He was the one that allowed Switzerland to win their first match in Group G.

Xherdan Shaqiri does a remarkable job on the side, he then serves perfectly Embolo who adjusts with the flat foot, André Onana. 1-0. We were playing 48Th minute. Cameroon is cold-picked. Embolo, who has just crucified the country he hailed from, refuses then to be jubilant.

But the Indomitable lionsBy obtaining good opportunities, had won the first period. Bryan Mbeumo (10)e) and Karl Toko Ekambi (12e) all had the opportunity to make the break in the first half.

The Africans have not scored any goals.

The matches are arranged in a similar fashion for the African selections. No African nation has scored yet after four World Cup appearances. Senegal lost to the Netherlands (0-2), while Morocco drew with Croatia (0-1). Like Tunisia against Denmark (0-0).

Cameroon is the only country that bows without planting a banderilla this Thursday, even though the Indomitable Lions have already framed three times in their 8 shots. At 4 p.m. GMT, Ghana will be the last continent representative. It will be against Cristiano Rosso’s Portugal.