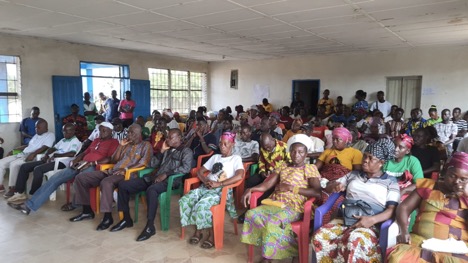 GRAND BASSA-Citizens in Grand Bassa’s Forth Electoral District say ArcelorMittal’s latest community engagement drive is an honor and a recognition of their role as owners of the land.

The citizens of District #4 which is popularly known as “Wee-Statutory District” believe that ArcelorMittal was now playing a key role in building a strong community relationship by engaging them through their own local civil society groups.

They told two separate town hall meetings on Compound Three and in Barseegiah Town that the recent community engagement will create not only a way to improve local communities’ benefits from the concession, but also boost AML’s employee morale, loyalty, and brand reputation.

Seihn, Compound Three, Glow Town, Barseegiah and St. John are some of the towns in Grand Bassa that are directly benefiting from the company’s 20% corporate social development allotment due to their proximity to AML’s operational area.

At one of CUSH’s town halls in Wayzohn City on Compound Three, dozens of community leaders in attendance thanked AML for agreeing to allot 20% of its social development payment to them.

“It is bringing more visible projects in the communities. All we need to do is to use it wisely and ensure it benefits all of us,” said Joe Payegar, the Statutory District Superintendent.

Youth & Students representatives who spoke at the gathering praised the company for fencing the Gorblee School through the 20% allotment and at the same time appealed for modern science laboratories, and technical and or vocational institutions in Wee Statutory District to mostly train young people.

At current, there are seven projects ranging from clinics, school, major infrastructure upgrades like extension of the Wee-Radio station that are all financed from AML’s 20% allocation.

“We cannot be enemies to the company,” one elderly man who identified himself as Uncle James told the meeting in Barseehiah Town

“I have my older brother’s son in Yekepa who works for Mittal Steel so it is not possible for me and my poor family to say Mittal should go because Christmas coming, and I expect him to send small things for us like he usually does”

“ALL we want is that whatever the company gives should reach us the poor people and not people for whom it is not intended”.

ArcelorMittal’s stay in Liberia has been a success. It has delivered tangible benefits to the entire county, and most importantly to the communities that are affected by its operations.

AML is currently building the first-ever public hospital in Gbarpa, Nimba. The company also helped to renovate the GW Harley Hospital in Sanniquellie, and donated $US40 million for the pavement of Ganta-Yekepa Road in Nimba.

ArcelorMittal has been providing support in the areas education, healthcare, and infrastructure. They have provided local and international scholarships, repaired hundreds of kilometers worth of roads, and made sure that people have safe drinking water.

Citizen United to Serve Humanity stated to the locals, “ArcelorMittal has the potential to deliver higher levels job satisfaction for employees who already work and those who want to continue working.”

The group said the Phase Two Expansion will enable the company to make a positive difference in the communities that “feel the impact of its work on a daily basis”.

Said Samuel Tobey the lead campaigner for CUSH: “small businesses here will benefit from this Phase two expansion because some will take contacts to maybe cook, to supply stationaries, truck services, and this will enhance their financial standing and create a new network of potential customers or future”,

ArcelorMittal’s phase Two Expansion will see the construction of an iron ore processing plant in Yekepa with an annual production capacity increased to 30 million tons.

AFRICA/MALI – The Episcopal Conference: “We have no news of the fate of Fr. Hans-Joachim Lohre”