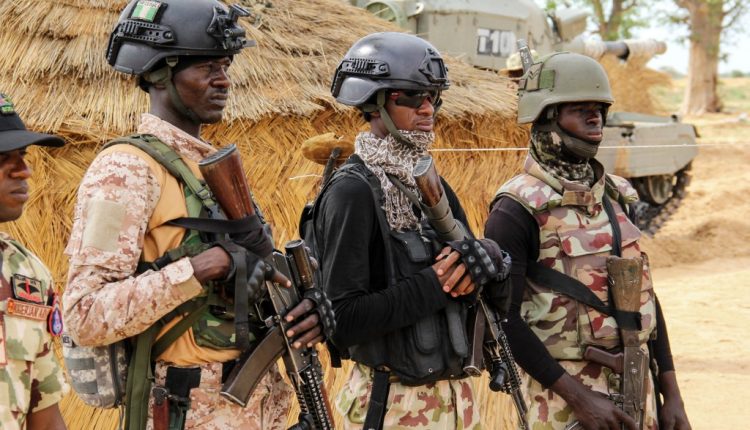 Numerous organised religious and political groups have been committing deadly attacks on Nigerians, and there has been an increase in violent crime. This has created a fearful atmosphere across Nigeria. The situation appears to be headed towards a dangerous explosion, with the media exaggerating the coverage and hyping up emotions. Ejiroghene Barrett, in Lagos, writes that the country’s leadership needs to de-escalate the situation and rein in the media.

A news report in one of Nigeria’s leading dailies reads “Nigerians are under siege by bandits, terrorists and other criminal elements…”. Although it may seem exaggerated, such headlines highlight the public concern that media reports have sparked and must be addressed.

The current security situation is paradoxical. Amidst the scars of a 14-year insurgency by the Islamist Boko Haram and its associate group, the Islamic State in the West African Province (ISWAP), life in Maiduguri, capital city of the country’s Northeastern state of Borno, the state hardest hit by the Islamist insurgency, is slowly picking up pace once again.

However, security forces are dealing with new challenges in other theaters throughout the country. A spate of violent attacks and kidnappings by ‘bandits’- a blanket term used by the country’s media to describe all new actors in this complex security maze, has created another battlefront for the government.

This new phase in Nigeria’s security conundrum is a complex one. Much like the Northeast, the country’s Northwest has become a major theatre of conflict.

A problem that started in 2011 and was initially confined to communal disputes between two of Nigeria’s main ethnic groups, Fulani cattle herders and local Hausa farmers, over access to land, has morphed into a national and regional security threat unleashing a wave of robberies and kidnappings across vast areas in Nigeria and neighbouring countries.

This conflict, which was previously contained, now has serious political implications. These will undoubtedly influence the debates leading to the 2023 elections.

In the country’s Southeast, resurgent calls for secession by some members of Nigeria’s third-largest ethnic group, the Igbos, originating from claims of political marginalisation, have evolved into violent confrontations between members of the outlawed pro-Igbo separatist group, the Independent People of Biafra (IPOB), and the country’s security forces.

A report by International Crisis Group (ICG) in 2020 indicated that since late 2019, ISWAP and Ansaru, a splinter group of Boko Haram that was active in the Northwest between 2011 and 2014, have started taking credit for attacks in the region – similar to what happened with the Tuareg rebellion in Mali.

The report notes that ISWAP claimed the responsibility for an attack on Nigerian troops at Sokoto, a state in Northwest Nigeria, in October 2019.

On 12 February, 2022, members of ISWAP carried out an attack on the railway line linking the country’s capital, Abuja, with Kaduna, the second- largest city in the entire north, killing eight passengers and abducting 61.

There have been three other major security breaches around Abuja since the February attack, raising worries about an alarming build-up of terror groups close to the nation’s seat of power.

One of these was an attack claimed by the same ISWAP on one of the country’s largest correctional facilities, the Kuje prisons, situated within the Federal Capital Territory, freeing about 900 of the prison’s 994 inmates, including incarcerated members of the Islamist group, according to government officials.

Despite the major successes of the military against terror groups, including the extermination of many insurgent groups around Abuja, Kaduna and Kaduna – the terror attacks continue to cause concern.

The Nigeria Security Tracker (NST), a project of the Council on Foreign Relations (CFR), reports that the insecurity has resulted in no fewer than 5,000 deaths in Nigeria between January and June, 2022. Despite a decrease in the number of deaths by approximately 650, these figures still pose a serious problem.

A major cause of the conflict in the Northwest – and resurgent questioning of Nigeria’s continued existence as a unified state – is the evolving dispute over cattle grazing rights and the incendiary consequences of cattle encroachment on communal farmlands across the country.

The reasons are obvious; two important factors seem to have played, incidentally, into the hands of a well-coordinated public campaign during the 2015 elections that portrayed Buhari’s candidacy as a grand scheme for Fulani political dominance and the Islamisation of Nigeria.

One is the increase in migration by cattle herders, who are fleeing from desertification in both Saharan and Sahel in search for new grazing lands to avoid wars and famine.

These migrants were infiltrated into West Africa by marauding outlaws, making distinctions between simple nomads or villains difficult. These infiltrations are fueled by the proliferation and distribution of small arms in West Africa as a result of persistent conflicts, including post-Gaddafi Libya.

Another factor is the inability of successive Nigerian governments regulate cattle herders activities over the years.

Popular is also a conspiracy angle to the current situation. Many inside and outside government believe the insurrections can’t be random. They insist there are political undertones.

These are bold claims, but they are bolstered by the unusual origins some of these subversive groups. IPOB’s insistence on secession is not new to the Southeast, but the group and its leader, British-born Nnamdi Kanu, suddenly emerged on the political scene about the same time as Buhari won the Presidential elections in 2015.

Some pundits suspect that the group was created to disrupt the government.

IPOB is still a major threat to Southeast functional governance.  where its members claim responsibility for violent attacks against government establishments and members of Fulani and Hausa ethnic group members, igniting ethnic tensions.

How the media reports on the events

Nigeria’s mainstream media organisations have gained a reputation for themselves as purveyors of sectional sentiments in the ongoing crisis.

The media have taken full control of inventing terms and choreographing public reactions as the events unfold. One example is the manipulation and definition of terms.

The terms ‘herdsmen’ and ‘bandits’ have become synonymous with all violent gangs operating along Nigeria’s highways and rural communities, encouraging the oversimplification of a complex identity construct.

The media’s narratives about insecurity have been described by many as sensational and been blamed for echoing the ethnic and religious stereotypes that dominate public discourse, downplaying other factors that have been responsible for the security challenges.

Radio stations that allow callers to misinform listeners and provide a platform for accusing a specific ethnic group of killings or kidnappings with no evidence are a threat to peace.

Many people have called for the censorship of media reports in order to avoid inciting any sentiments that could lead towards an escalation in the Rwanda genocide’s scale.

The Nigerian President Muhammadu Buhari is one such voice. He urges the media to address the “tone, content, and standards of reporting into security and safety measures”.

Nigeria’s defence chief, Major-General Lucky E. O. Irabor, has also spoken up, emphasising the need to implement a press code for responsible journalism that would include the development of guidelines for reporting stories of conflict and terrorism.

The debates about Nigeria’s security structure will be prominent in the campaigns. Political alignments will undoubtedly weigh heavily on a rational conversation about how to address the current insecurity.

Candidates in the 2023 Presidential Race will need to present concrete strategies to address the issue and find lasting solutions for the contentious debates about grazing rights.

The federal government will need to give up some of its functions in order to spread its influence throughout the country.

One such major function is the federal government’s exclusive control of the country’s police. The central government’s increasing demands that states establish their own police forces has been a matter of concern for many Nigerians for a long period.

The media’s incitement of sectional sentiments has diverted the spotlight from core concerns that need to be addressed; this includes coverage of serious proposals for investment in training and equipping the country’s police to ease the responsibilities placed on the armed forces currently.

On the Southeast issue, some commentators say the government would do well to hold back from violent suppression of the demands for secession and rather, commence a process to reassess Nigeria’s federal structure.

On the opposite side are those who consider the demand for a reassessment unnecessary and who see the country’s unity as non-negotiable. These diverse opinions will play a significant role in public debates.

Clear plans for how to stop the current tide will determine who is elected to government in the upcoming elections.

Election campaigns will need to address perceptions created by the dominant media narratives. The side one stands on will determine how these messages are received.

Insecurity is the biggest threat in the room. Many politicians and public figures are avoiding it or using it to sell their products. However, it requires serious, expert, and broad-ranging discussion to discover. Not only are there solutions, but also the methods to implement them. Insecurity is a fire that is growing in momentum and could consume the entire country if it is not controlled.

Seven arrested for wildlife crime in one week – The Namibian