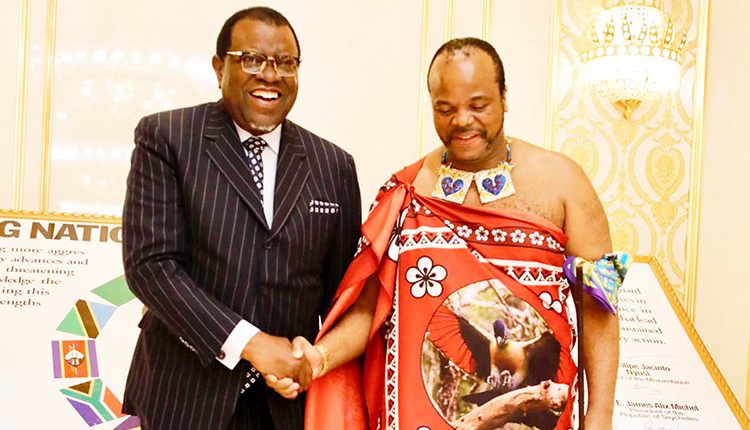 Solutions to Eswatini crisis in its own hands – Geingob – The Namibian

PRESIDENT Hage Geingob stated that the solutions to the Eswatini crises will not come from the outside, but are in the hands and control of the kingdom.

The Kingdom of Eswatini was rocked by violent conflict, including the bombing of state infrastructures and attacks on security personnel.

Since May 2021 Eswatini has witnessed deadly protests. Demonstrators are demanding democratic reforms and accusing King Mswati II of repression.

Geingob was last Friday in Eswatini, where he had talks with the monarch.

“You do not make peace with friends, you make peace with your enemies, and solutions must be found in the kingdom to whatever challenges there may be. Solutions will not come from outside but from Eswatini,” Geingob said.

The president was in Eswatini as the chairperson for the SADC Organ on Politics, Defence and Security Cooperation.

Geingob, in a statement said it was important to hear from “all sides in order to find common ground, to avert any crisis”.

He stated that this would allow Eswatini to establish peace and development for the benefit of the entire SADC region.

Geingob cautioned that “when diplomacy fails, people go to war”, adding that “it is for that reason that dialogue was necessary for explanations to be provided and for everyone to be heard”.

Swaziland Multi-Stakeholder Forum has called for a transitional government and urged the leaders of the Southern African Development Community (SADC), to find a way out of the political instability.

The forum welcomed the regional effort, which included Geingob’s consultative trip, but they questioned the slow pace and stressed that it had been a year since SADC, king Mswati III, agreed to the creation of a national dialog forum.

“We welcome the move by the leaders of SADC to allow the chairperson to conduct consultations with the King on the implementation of its decisions,” the forum said in a letter cosigned by co-chairperson Thulani Rudolf Maseko and Nombulelo Motsa of the Political Parties Association.

“But the lingering question is – how many of these consultations shall be held before SADC is decisive on the question of finding a lasting solution to the crisis in Swaziland?

“We have no illusions that the process of dialogue and negotiation can happen with the king and government agreeing on it. We are equally clear that to date the king has shown no signs of willingness to commit to the process,” the forum said.

Geingob was also asked by the forum to urge the withdrawal of the army and its communities from the streets and communities to end the state of emergency.

They are also calling for the release of members of parliament – Mthandeni Dube and Bacede Mabuza – and all other political prisoners. They also demand the establishment of an interim transfer authority and a set time frame for dialogue.

The Presidency, in a statement said Geingob was in Eswatini to introduce himself as the new chairperson of the SADC organ, “having been entrusted with the mandate to deal with the issues of peace and security in the region”.