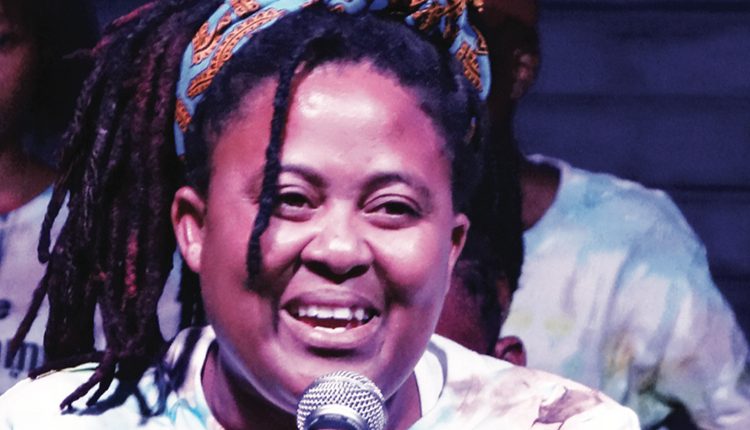 The festival, which was organized by the Women’s Leadership Centre and sponsored by OSISA, lasted for a week and culminated in an evening at The Brewers’ market last Friday.

The festival’s weekday programme used creative expression to not only express the realities of lesbian women on the continent, but also to heal. It featured a series of presentations and panel discussion alongside tie-dying and self-care yoga and mindfulness sessions.

“Lesbian women from 6 regions of Namibia gathered in Windhoek to build friendship and solidarity while they prepared to take on public space to share their realities and experiences through creative and performance arts,” says programme lead for the WLC Lesbian Empowerment Programme Irene //Garoës.

“This built on local workshops and public performances in the regions prior to the festival, through which we reached over 80 young lesbians and selected the 25 participants for the festival in Windhoek,” //Garoës says.

“This is how we build the feminist lesbian movement in Namibia, bringing young lesbians out of their isolation so they can build community with one another at the local and national level and stand together to claim their space and their rights.”

The WLC collaborated this year with Young Feminists Movement Namibia Trust (Y-Fem Namibia Trust), as well as Iranti, a South African-based organisation advocating for the rights of LGBTQIA+ persons in Africa, for the festival.

“The aim for the international delegates was to learn how the Namibian organisations mobilise young lesbians using creative arts, and to explore movement through arts,” says Garoës.

“Using creative expression we explored and redefined love for ourselves. With freedom, it was important for us to name the things we want freedom from, what freedoms we enjoy and the freedoms we dream to have,” //Garoës says.

“Autonomy had to do with our right to choice, bodily autonomy and integrity.”

Windhoek hosts many LGBTQIA+ events. But the Namibian Lesbian Festival focuses on its main event.

“Homophobia is still deeply ingrained in the hearts and minds of many people in Namibia, and lesbians experience discrimination, violence, hate, demonisation and social exclusion in their families, communities, schools, health services and churches,” says WLC programme manager Liz Frank.

“As lesbian women in this country, we want recognition of our right to choose whom we love and build families with, i.e. the right to marry, to adopt children and access to artificial insemination as well as our right to dignity and respect at schools, health services, police stations and access to housing and employment,” says //Garoës.

“The Combating of Domestic Violence Act must include protections for same-sex couples,” //Garoës says.

The Namibian Lesbian Festival is a moment of celebration, connection, and community-building as the fight continues for inclusion, recognition, and human dignity.

“The festival was a celebration of who we are as lesbians,” says Frank. “Our pride, our power, our joy, our love, our friendship, our autonomy, our freedom.”