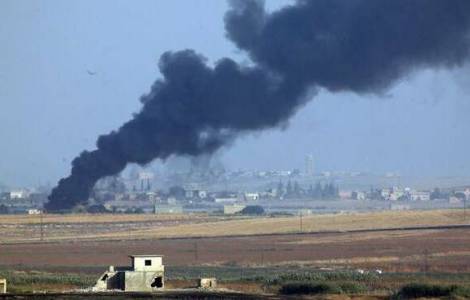 ASIA/SYRIA: Let us pray for the end to Turkish military operations in north east Syria

Aleppo (Agenzia Fides) – The Armenian Catholic patriarchate has invited people to pray during Advent, asking for peace, the end to suffering, and protection for the population of northeastern Syria. The Turkish armed forces have long used this area as a target for military raids and shelling against Kurdish targets. This is the request, of a spiritual nature made primarily to the communities scattered in the Middle East and the rest of the world, by the Armenian Catholic Patriarchate, while aerial bombardments, attacks with drone strikes and artillery attacks carried out at the instigation of the Turkish government against the cities of Hassaké and Qamishli and against the peoples of the Syrian provinces of Aleppo, Raqqa, Deir ez Zor and Hassakè continue. According to the Armenian Catholic patriarchate’s call to prayer, the military attacks have affected the infrastructure and prevented the supply of electricity and water to the local population. The situation is one of pain and suffering. According to the appeal, it is necessary to ask the Lord to grant peace to those people and lands that are subject to endless conflict. The Turkish military incursions have the purpose of attacking Kurdish fighters located in northeast Syria. This area is de facto under control of Damascus and subject to the so called Autonomous Administration of Northeast Syria (Syrian Democratic Forces – SDF). An alliance of Kurdish-led forces, militias and militias formed during years of conflict in Syria. The military escalation also has affected civilians and army soldiers from Syria. Recently, in Hassaké, an attack on a gas plant caused a colossal fire, killing and injuring workers, while Turkish shelling in the Deir ez Zor area also alerted US military posts there. Dozens of detainees belonging to the Islamic State (Daesh), jihadists, managed to escape El-Hol camp after a drone bombardment. Many analysts believe that the Turkish military offensive in Syria along the border could open the door to a ground invasion. (GV) (Agenzia Fides, 24/11/2022)