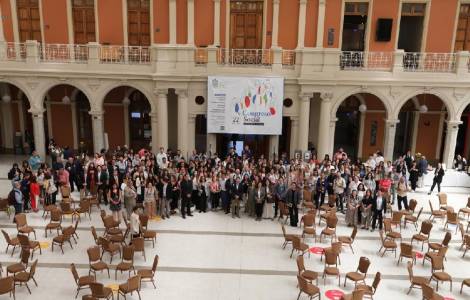 AMERICA/CHILE – Card. Aós: The University and the “dialogue for unity”. A lot of prayer is needed “if we really want dialogue”

AMERICA/CHILE – Card. Aós: The University and the “dialogue for unity”. “If we truly want dialogue”, prayer is essential.

Santiago (Agenzia Fides). There are two very useful tools in democracy for confronting and presenting ideas: dialogue and debate. The goal of debate is to win. He wants to win an argument. He opposes the other and looks for weak arguments. Dialogue is very different because the goal of dialogue is not to win but to understand. One person tries to explain himself and asks another to explain. The other seeks out ways to listen and to understand. It takes self-discipline and tolerance to be able to listen to what can be very uncomfortable. Alfredo Zamudio, director of Chile Mission of Nansen Center for Peace and Dialogue, highlighted these concepts during the inaugural conference of VI Social Congress UC, organized by Direction of Pastoral Care and Christian Culture. Zamudio emphasized the need to create a shared future in which there is not only unity, but also where diversity can be shared. The meeting was oriented towards the “Dialogue for Unity”; it attracted around 300 people from 100 different civil society organizations, including foundations and institutions, who wanted the opportunity to discuss the issues that face national life, and to find ways to improve it, according to the social doctrine of Christ. In this context, the Rector of the UC, Ignacio Sánchez, underlined the importance of promoting this type of meeting: “Our public role as a university is manifested in the capacity of our institution to promote and strengthen dialogue in our country. This is essential for our society. In this sixth edition, we will respond to Pope Francis’s invitation to Chile to establish a dialogue for peace. I am inviting you to this Congress to have a dialogue for unity in our country and at the university. Cardinal Celestino Aós, Archbishop of Santiago and Grand Chancellor of the UC, led the recitation of the Prayer for Peace attributed to St. Francis of Assisi, and underlined: “St. Francis of Assisi grew in his love for the Church and for society, and became a peacemaker and instrument of peace. We know intelligence is not enough. If we are to be able to dialog, we must spend more time looking at Jesus on his cross and praying. This will help us open our hearts. The Congress was divided in three thematic panels, which allowed for reflection on the most pressing issues: “Craftsmanship to peace”, “Recognition that a “we” and “Towards an integrated human project”. Some topics were also suggested to be discussed in small groups of eight. Among other topics discussed during the exchange of experience were civic friendship, migration and integral ecology. They were addressed. Father Jorge Merino of Pontifical Catholic University of Chile, Major Chaplain, highlighted the atmosphere of the participants. “With great joy we saw many people participating; it was clear that there was a desire for sharing, to learn and to dialog to build peace and harmony.” He then emphasized the role of the university in this context, saying: “We echo Pope Francis’ words that the University must make a contribution to society. Today, we see in Chile that a lot dialogue is required, a lot unity is needed. Therefore, with simplicity from the University, guided and guided by the Pastoral Care, we want help to promote dialogue. Benjamin Cruz F., Director, UC Pastoral Care, stated that this was the first time the Congress was held in person: “It’s precious to meet again, and to regenerate networks, ties between institutions, and people. The greatest challenge we leave this Congress with is the desire to help Chile, to create a more just society. “This year’s congress was very relevant to the social, political and cultural context in which we live. This is a strong response, not only for continuing the dialogue, but also to mobilize to action. The digital book will contain the reflections and commitments from the VI Social Congress of the UC. Chile continues to be in deep political, economic, and social crisis more than two months after the plebiscite rejected the draft Constitution.