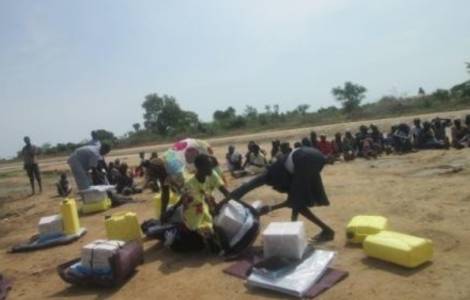 Juba (Agenzia Fides). – Civil war that has raged for many years continues to cause thousands of deaths, displacements and destruction of infrastructures. Failure to respect the 2018 peace agreement (see Fides, 6/7/2018), fuels political instability which leads to violence and inter-ethnic conflicts. Despite the February 2020 compromise between rival groups, led by Salva Kiir (the president) and Riek Makar (the country’s first vice-president), there is still no peace or stability. Due to ongoing disputes among the rivals, many provisions from the 2018 deal are still unimplemented. Stephen Ameyu Martin (Archbishop of Juba) launched an appeal to promote peace in the East Central African nation. The thanksgiving mass was held in the Cathedral of Saints Peter and Paul to mark the centenary of Torit’s diocesan diocese. “Be pillars in stability, peace and unity within your communities and work to the good of your fellow citizens,” said the Archbishop, adding that clergy members must be aware and conscious of their responsibility before God. “You must act as a mediator of God’s will, as priests. For a sustainable peace, priests must encourage reconciliation between communities. The Archdiocese’s local ordinary, who is also the apostolic administrator for the diocese, encouraged those present to do good deeds every day for the good of the Church as well as the communities. He said that everyone will be safe in Church and State if they learn how to do things right. The leader of Catholic Church spoke in conclusion, “May God grant us peace to live together” and to be able to work for both the good of the Church and the country. South Sudan has 8.9 million people in need of assistance. The country is facing a crisis due to many factors. To this must be added the climate effect from the floods that continue to increase each year and worsen the agricultural land and livestock conditions, which are the main sources for subsistence. After several delays, the transition period that was supposed lead to elections in 2023 was extended by 24 more months in August because of insufficient progress on many provisions. (AP) (Agenzia Fides, 24/11/2022)