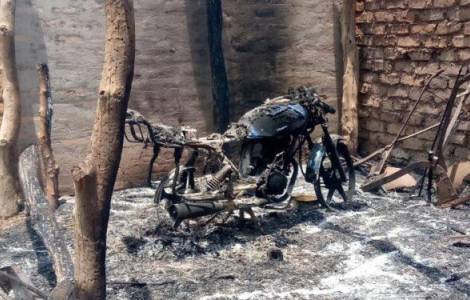 AFRICA/CHAD – After clashes between shepherds and farmers: Bishop of Sarh calls for justice and solidarity with victims

AFRICA/CHAD — After clashes between shepherds & farmers: Bishop of Sarh calls out for justice and solidarity with the victims

N’Djamena (Agenzia Fides) – “Once again blood has been shed on our country. Another time, innocent people have been killed or injured by the iniquity a few gunmen. Once again the property of citizens already living in poverty has been destroyed”, says Bishop Miguel Angel Sebastián Martinez of Sarh in southern Chad, upon returning from his visit to Kyabé, where clashes broke out a few days ago between rival communities, leaving around a dozen dead and twenty injured.
The bishop demands justice: God listens to the cries and will eventually do justice. Rest assured. He insists that while we wait for divine justice, “the Authorities must Act.” I call on the administrative and judicial authorities to tell the truth about what has happened. It is a truth that must not be concealed or manipulated. We cannot achieve peace without justice.”
The Bishop of Sarh appeals to solidarity with those who have lost loved ones or material goods and with those who have had to flee their homes, already at risk of starvation from the floods that have decimated their crops.
Conflicts between shepherds and farmers are common in the province, often resulting in deaths. The violence broke out in September following a dispute between a farmer with a herdsman. He was accused of herding the flock into his field. There have been clashes since then in several villages across five cantons in the Lac Iro district. According to provincial prosecutors: The clashes left 19 people dead, 22 injured, and 18 arrested on each side.
According to UN reports, the July 2021 UN report states that there were 309 deaths in Chad and 182 injuries. More than 6,500 people were displaced by community conflicts. There are also ongoing tensions between communities.
The United Nations calls on “long-term solutions that satisfy the needs pastoralists, farmers, and the general population in terms access to natural resources, and services” to end these conflicts. (L.M.) (Agenzia Fides, 24/9/2022)