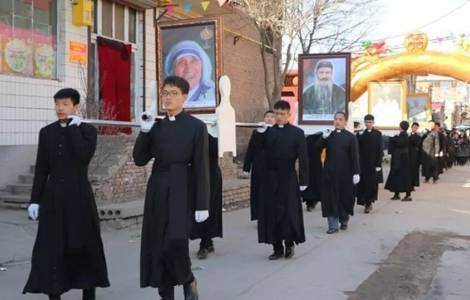 VATICAN – The China-Holy See Agreement and the treasure of faith

VATICAN – The China-Holy See Agreement, and the treasure of faith

Gianni Valente
Rome (Agenzia Fides). – On September 22, 2018, just four years ago the Provisional Agreement on the Chinese Catholic bishops was signed in Beijing by representatives of both the Holy See and China’s government. The Agreement allowed for a two-year period of application ad exemplium. The agreement’s validity was extended by two years in October 2020.
Today’s public statements by Pope Francis, Cardinal Secretary of State Pietro Parolin, hint at a positive intention from the Holy See to continue the negotiation process. They also requested that the agreement be implemented in due time and discussed the margins for progressive improvement with the sole purpose of entrusting pastoral office to suitable and worthy bishops.
To grasp the reasons of the Pope’s approach, as well as that of his collaborators, it is enough to keep in mind the recent history of Catholicism in China and recognize what has been been compass that has guided the steps of the Holy See during decades dealing with the affairs of Chinese Catholics.
Since the signing of this agreement, illegitimate episcopal ordainments in China have been banned.
Six new Catholic episcopal ordinations in China have occurred over the past four years. These ordinations also include the issue of the Papal Bull of Appointment. At the same time, six so-called “clandestine” bishops, consecrated in the past without following the protocols imposed by the Chinese apparatus, also requested and obtained public recognition of their role by the political authorities in Beijing. They are few, given the many vacant Catholic dioceses in China or their heads by very elderly bishops. However, all Chinese Catholic bishops today are in full communion with the bishops from Rome.
The current agreement with the Chinese authorities does not compare to other models of agreement that the Holy See has reached with other governments (the most recent being the one with Kazakhstan at Pope Francis’ recent Apostolic Visit to Central Asia) to ensure legal recognition as well as flexibility to Church institutions and pastoral agents in different national contexts.
The Agreement for the appointment of Chinese bishops touches upon the most fundamental elements of the apostolic nature, and the dynamism, of the Church’s sacramental ministry. The Agreement addresses the faith of Chinese Catholics and the suffering caused in recent decades by ecclesial injuries that have divided clergy, laity, communities, and families. The agreement focuses on the memory of the martyrs and validity of the sacraments which are celebrated in churches, chapels, homes and parishes throughout the People’s Republic of China. Contrary to what is usually the case, agreements between the Holy See and governments and sovereign entities are not applicable to goods belonging in a different order.
The sacramentality of the Church and the apostolicity of its Church were recognized, preserved, and lived within the pastoral framework of each Chinese church’s ecclesial ministry. It cannot be described as “disappointing” if one considers at least a small part of the history from whom one came.
The dominant representations about the relations between China & the Vatican do not reflect the factors that pushed it to follow the path it took, nor the criteria that influenced its decisions on questions so critical to the sensus Ecclesiae, which are usually suppressed or hidden.
Those who consider the Agreement to be a failure or a mistake to regret must not only remove references to the sacramental dynamic that sustains the Church but also conceal everything that has happened in Chinese Catholicism over the past seventy years.
There were times when the official media of China defined the Vatican and the Bishops as the “watchdogs of Western imperialism.” Today, even during the period of increasing international tensions between the People’s Republic of China and Western geopolitical sub-states, no one from China thinks of insulting Pope Francis or the Catholic Church as agents hostile forces.
As tensions rise and power clashes intensify, it is worthwhile to reflect with faith on the delicate and providential circumstances in which the small number of Chinese Catholics find their selves. They can share this experience with their compatriots and have the opportunity to confess Christ in China today without any privileges.
Like all Chinese citizens, Chinese Catholics live within the framework of Chinese civil authorities’ provisions. As baptized, they adhere to the faith of apostles, of which communion is an integral component. Their condition can cause fatigue, disappointment, and suffering. By remaining immanent in such a condition, one can witness, to the possibility to confess faith in Christ, to the possibility to walk each day with his company in China today, such is it, performing the simple gestures connected to the mission to salvation entrusted Jesus to His own: proclamation and catechism, administration, administration of sacraments and works of charity for brothers/sisters in need. This current of Christian experience is free from suspicion and is reflected in the daily lives of many Chinese Catholic communities.
The decisive factor in the many happy and difficult events that have marked the past seventy-years of Chinese Catholicism was precisely the faith of Apostles in which bishops and priests of that Church were in all cases kept. Not because of stubborn voluntarism or heroism, but because of grace. The last Successors were able to see and testify that their communion with China’s Catholic church was not to have been restored by juridical supremacy. It was because such communion was already in place, based in the same Catholic faith. It is the only treasure you can rely on, even in the most mysterious and controversial events of our time. (Agenzia Fides, 22/9/2022)