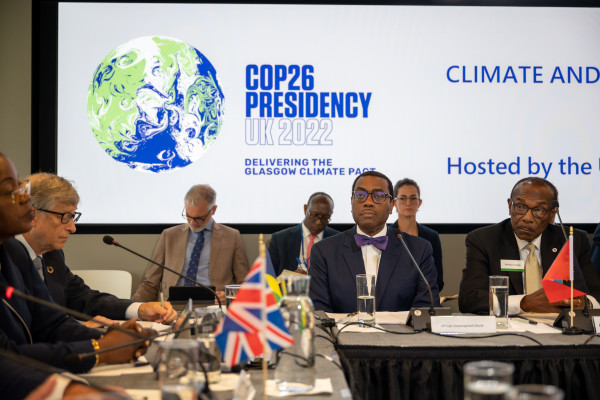 No Time to Waste. Ministerial Meeting Calls for Urgent Financing for Countries Most Vulnerable to Climate Change – African Business

There are just two months left before the UN Climate Change Conference (COP27), and Egypt, Africa, and other developing countries in the world that are most affected by climate change are warning against making it a mere talk shop of promises.

African Development Bank Group President Dr. Akinwumi Adesina, and speakers at the 2ndOn Tuesday, a ministerial meeting about climate and development was held in New York on the sidelines to the UN General Assembly. The participants questioned the ability of developed countries in New York to keep their promises at COP26 in Glasgow and in the 2015 Paris Agreement.

They called for urgent action to raise funding for the world’s most vulnerable nations.

The top-level meeting calls for climate and natural objectives to be integrated into financial and economic policy. A significant action point will also be presented at COP27, November.

“We are late. We must act. I’m fed up with saying the same thing too many times in the same meetings. The collective enemy is business as usual. It’s time for action,” said US climate envoy John Kerry adding, “We are working on something serious to be put on the table at Sharm El Sheikh.”

Senator Kerry spoke of his recent trips to Nigerian and Senegal. These are two of 48 sub-Saharan African countries that contribute less carbon gas emissions than 0.55%, but still suffer from climate change’s impacts.

He stated that the world must change its business practices ahead of COP 27, and called for the participation of the private sector in raising the necessary financing to combat climate change.  “Climate and development go together. The key question is: Where is the money? All promises were left in Paris.”

Dr. Adesina portrayed the reality of climate changes in some African countries, and described it as a heart-wrenching situation.

“In Cabo Verde, they have not had rain for nearly three years. In Mauritania, vast areas are deserted because of lack of rain,” said the African Development Bank head

Adesina told the meeting: “Africa is suffering, choking, and is in serious financial distress for what it didn’t cause. There must be a greater sense of urgency not in talking, but in doing and delivering resources that the continent needs very desperately.”

He charged the world to deliver at COP 27 -the Africa COP, “we must deliver the goods there. If there are good to be delivered, it’s really about adaptation. We do desperately need to have the financing for adaptation.”

Adesina spoke of the bank-led Africa Adaptation Acceleration Program that is mobilizing $25 billion in financing to support the continent.

The speakers called for a coordinated strategy that includes funders, partners and the private sector working together in order to finance climate change, particularly adaptation. They also called on countries to honor the pledges they made at the UN Climate Change Conference 2021 in Glasgow.

“Adaptation never gets the attention it deserves.  Bill Gates, co-founder of Bill and Melinda Gates Foundation said that we need to ensure that we are funding the most impactful projects.

He spoke out about how climate change has been exacerbated by a string of severe weather events in the past year. He stressed the need to take urgent action, including investing in scientists and technologies in developing countries.

“It is fantastic that there is the goal of doubling adaptation money by 2025 to $40 billion. Here are some thoughts on how we measure those 40 billion dollars.  First, it should be focused on low-income nations. These needs are very severe. There is a question of how we define that money given these weather events and their effects on agriculture…”

He added: “I don’t think the world community is saying that we should spend less on vaccines in order to fund climate adaptation, but rather that we want this money to be incremental in the aid budget.”

Rwanda’s Minister of Environment, Dr. Jeanne d’Arc Mujawamariya, and co-chair of the meeting echoed the voices of young people at the meeting.

She said: “As you can see, young people are worried about their future. Let us use today’s ministerial meeting to learn from one another and share practical and tangible actions that will make young people proud of us. We are here together, working hand in hand to address the climate crisis to ensure a bright future for our young people.”

“Papua New Guinea is one of many island nations experiencing the wrought of the climate and nature crisis-long droughts, submerging islands- you name it. My people and I are existing in these conditions every day,” she told the meeting.

Referring to what she described as a lengthy and complicated legal process to access climate funds at the national and international, she observed: “I must stress that mother nature does not operate within legal frameworks, and we don’t have time to waste.”

Executive Secretary of the United Nations Framework Convention on Climate Change Simon Stiell echoed the need for what he termed “a series of actions” to mobilize finance.

“We need to get the whole architecture working. Climate disasters are becoming more common in many forms. We are formally in a decade of decisive action,” he reminded the meeting.

The Second Climate and Development Ministerial Meeting, co-chaired jointly by the UK COP 26 President and Rwanda, was held to review the progress made since the COP 26 UN Climate Change Conference and move forward with transformative global climate action.

The meeting brought together representatives of 30+ countries, as well as representatives from the UN and the World Bank, Africa Development Bank, and IMF. It was designed to assess progress in areas of priority for climate-vulnerable nations and to deliver climate action.

APO has issued this Press Release. The content is not being monitored by African Business’ editorial staff. None of the content has been validated or checked by our editorial teams, proof-readers or fact-checkers. This announcement is solely the responsibility of the issuer.

N$6,2 billion worth of fish exported up to July – The Namibian