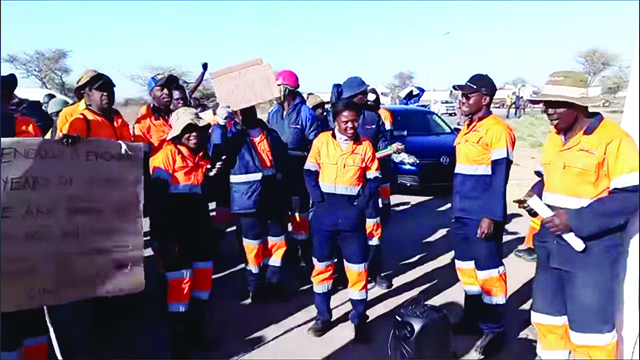 On Tuesday, Etosha Fishing at Walvis Bay employees marched through the streets to protest the management.

Workers demand that the company provide decent jobs as required by the Namibian Constitution, and the Labour Act 11 (2007/07).

They are also dissatisfied about their housing allowance.

Workers also claim that the company has fired some employees unfairly, especially when they fail to report for duty.

The company claims to send employees text messages informing them to report to duty. But some employees don’t receive the messages. They want the company’s phone to be used as a notification method and to reinstate those who have been dismissed.

The workers are particularly upset that their salaries get deducted every time they use the bathroom.

According to the company, employees are required to submit their medical passports to determine what type of treatment they receive from doctors. According to workers, this violates their privacy right.

They claim that they do NOT receive compensation for going on leave. However, those who retire at retirement age will receive N$100 per annum for their work for the company.

A sum of N$5000 was supposed to be paid to each employee. However, some employees were not able to receive these funds.

Workers want the managing directors and human resources managers to resign and to meet with the chairperson.

They gave the company 10 days to address their concerns, and then came up with a solution.

Nezette Beukes (the managing director) received the petition and promised to review it and get back with the workers.

Afrocan 2019: the day the Leopards scratched an entire continent