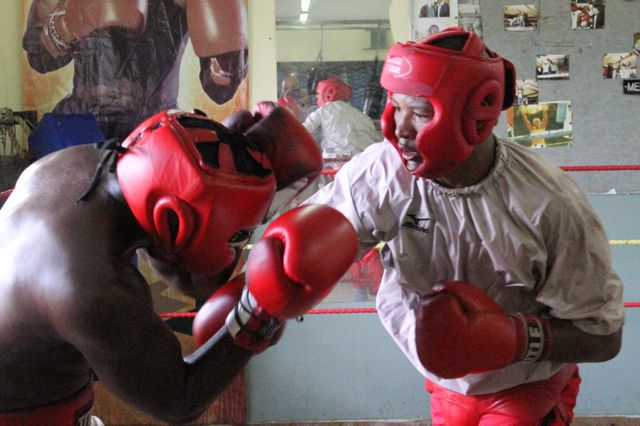 EUROPE loves Vikapita Meroro, ‘The Beastmaster,’ which is why he keeps coming back to his trainer Immanuel Moses.

They traveled to Russia yesterday in preparation for Meroro’s clash against Umar Salamov (22-2), an ex-holder of the IBO light-heavyweight title.

Meroro is now in the final stages of his career and Meroro’s chances to win in the cruiserweight fight look slim given recent uninspiring results as well as Salamov’s fearsome pedigree.

Moses stated that the 37-year old former African champion (30-13), is still far from finished, despite only two wins over his 11 previous fights, dating back as 2015.

His representative said that Meroro’s love of the sport and a need for support for his family are partly responsible for Meroro continuing to fight, even when his best years are behind.

“Meroro is the busiest boxer in Namibia at professional level in terms of fighting internationally. Meroro has been busy because of his dedication to the sport and also because of the performance that he gives when he steps in the ring,” Moses said via WhatsApp, while in-transit at OR Tambo Airport in Johannesburg.

“The Europeans love him because he always gives all action and he’s good for TV, that’s why they keep requesting him,” Moses said.

“Meroro has been fighting most of the prospects in the world and he always shows them that he still has what it takes to become a champion.

“Even with those defeats he has, he’s still at the top in Africa. He is Africa’s number two at cruiserweight and heavyweight. Unfortunately, I didn’t have a sponsorship in the country but once I get that, I’ll be able to put him on the card locally to rebuild his record.”

Moses maintained that it is not dangerous to take on younger fighters at the peak of their power.

He plans to use Saturday’s fight to prepare for another big showdown.

Moses said that Meroro is still an extremely capable fighter who understands how dangerous it is.

“As you know boxing is a very dangerous sport. It’s always good when you have a representative that gives you the right fight at the right time,” Moses said.

“There’s no other way to make a living in boxing as a boxer by not fighting. Whether you’re a boxer in Namibia and you’re just in the gym, the damage is the same as you get in a fight,” the African Connection Boxing and Fitness Academy founder said.

“It’s better for a fighter to go out there and show their skills to the world and make the money to help their family.

“Fighters get better money outside than at home. Boxing is not just about winning the fight, by going out there, you’re already a winner.”

Filston Mayele, the great African sensation at the start of the season