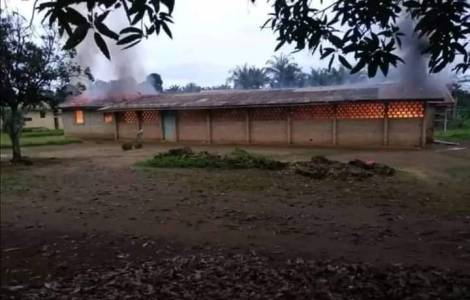 AFRICA/CAMEROON – Kidnapped Catholics: “We don’t want to create dangerous precedents; we do not pay the requested ransom”

AFRICA/CAMEROON — Kidnapped Catholics – “We don’t want to make dangerous precedents; and we do not pay any ransom.”

Yaoundé (Agenzia Fides) – “We will not pay a dime” to the kidnappers of the nine worshippers taken from St. Mary’s Catholic Church, in the village of Nchang (see Fides, 19/6/2022) in the Anglophone area of Cameroon. Msgr. Andrew Nkea Fuanya the Archbishop from Bamenda stated that paying the ransom demanded by the kidnappers, (see Fides, 20/9/2022), would “create a dangerous precedent.”
Msgr. Nkea reported, that the kidnappers, who are Anglophone separatist fighters members, first demanded a ransom for US$100,000. They then began to bring it down, and now they want US$50,000.
The Archbishop also told reporters that the separatists said they attacked St. Mary’s Catholic Church in Nchang near Mamfe and burned it down because they were angry the Catholic Church does not support their struggle.
Fr. Emmanuel, Fr. Barnabas, Fr. Cornelius, Fr. Elias and Fr. Job-Francis. Along with the 5 priests, Sister Jacinta was kidnapped along with 3 lay faithful: Mrs. Kelechukwu and Mr. NkemPatrick, and a young lady, Blanch Bright.
Msgr. Aloysius Fondong Abangalo, bishop of Mamfe, who visited the burnt down structure shortly after the incident accused boys from the Nchang village of having joined separatist fighters, popularly known locally as “Amba Boys”.
Fr. Humphrey Tatah Mbuy stated that there had been kidnappings, but only in isolated cases. The attack on the church appears to have been planned again, with nine kidnapped and the church being burned down. This is a rare case.
Anglophones make up the majority of the population in the northwest and southeast of Cameroon, which is a predominantly Francophone country. The resentment against the Cameroonian government has increased over the years as a result of the residents of these areas feeling discriminated against by institutions, particularly in schools and courts. The protests started peacefully but quickly escalated into an armed struggle that culminated in the declaration of an independent state, the Federal Republic of Ambazonia, in 2017. This was not recognized by international authorities. (L.M.) (Agenzia Fides, 22/9/2022)