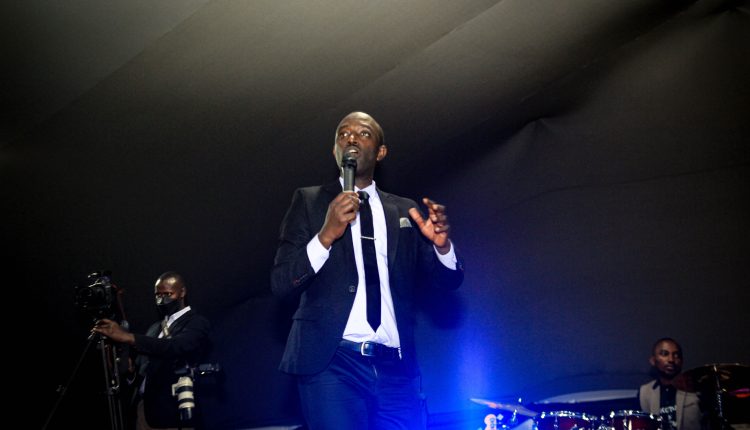 Many people enjoyed the music and celebration of Rwandan liberation at the Inkotanyi Ni Ubuzima concert, which was held at Kigali Convention and Exhibition Village.

Around 4 p.m., the audience began arriving and took their seats. The venue was decorated in white and grey.

Around 5 PM, a band took control of the stage and warmed up the crowd who were still filling it.

Their music was clearer, sweeter, and harder to hear from an elevated stage, where everyone could see them. They cheered the crowd with songs about liberation and wore green tshirts labeled “Inkontanyi Ni Ubuzima”, which translated to “Inkotanyi means life”.

“Inkotanyi” are soldiers of the Rwanda Patriotic Army that liberated the country from Genocide against Tutsi, which claimed more than a million lives.

The official event was officially introduced by the MC at 6:15 p.m. The MC gave the band more time, and the band members cheered up the crowd with huge songs like “Badutinye”. A few people were seen in the crowd parading like soldiers.

The MC welcomed Dieudonne Muyanshoza to the stage with great energy after the band. He performed hits songs like “Simba Yatembeya …””, “Dukomeze Kwibohora”, and the audience was compelled to dance to the music.

He was soon followed by Nyirinkindi. The audience cheered him on and lifted him up in the air while he performed. His song “Mwarakoze”, in which he thanks Inkotanyi, was most highly praised.

Next on the stage was Senderi International Hit. The crowd sang along to his songs, ‘Twaribohoye,’ and Ibyo Kagame Yatugejejeho. They couldn’t afford to ruin the enjoyment.

Around 7:34pm, Bonhomme was introduced by the MC. He is the headliner and organizer of the annual event. His songs “Inkotanyi ni Ubuzima”, “Humura Ntugipfuye”, and “Inkotanyi ni Ubuzima”, cheered the audience, making them dance to their beats. This was a tribute to the hard work, dedication, patriotism, and hard work of Inkotanyi. He ended his performance at 8:16 p.m.

That was before the MC introduced Jean Pierre Dusingizemungu, the President of Ibuka to address the audience.

He spoke of the heroism in Inkotanyi and asked for the audience’s attention to the lives of those who were killed during the liberation conflict. He urged the audience to follow in  their steps by fighting for the country’s unity.

A one Nsabimana, who attended the concert, said  that he enjoyed pure Rwandan music while learning about the liberation of Rwanda and why people celebrate it.

Ange Ituze, one of the revelers, stated that the concert was a reminder what Inkotanyi did for the country. He added that the songs are entertaining and remind us to keep the Inkotanyi heritage.

Women’s CAN 2022: Mariem Houij, the Tunisian star, dreams of the last four