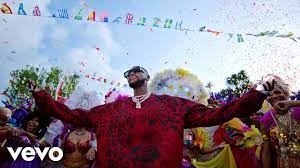 The much anticipated visuals for the chart topping music track by sensational Nigerian singer, Kizz Daniel, Buga has finally been released, much to the delight of the singer’s fans and lovers of the music.

Produced by Nigerian singer-songwriter, Tekno, Buga (Lo Lo Lo) has been topping charts since its release in early May this year… As at the time of filing this report, the hit track is already reported to be the third most-streamed song of 2022.

The colourful visuals have been made available to fans and admirers of the song’s chart-topping success. The music video, directed by talented filmmaker TG Omori, features a bright coloured theme with good vibes and a cameo appearance by Sabinus, a Nigerian comedian.
With vixens donning really colourful festival costumes and professional dancers using their energy to add more life to the video, it’s obvious that the visuals for the song perfectly reflects the energy the song brings.
We anticipate that the music video will reach a million views in just a few weeks.

Scroll down to see the stunning music video.

Over 1.9 billion USD raised towards the Kigali Declaration against NTDs