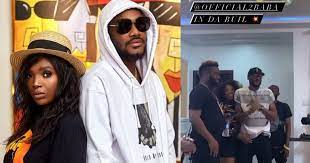 Innocent Idibia, a popular Nigerian singer, surprised Annie Idibia when he visited her on the set of a new movie. Actor Stan Nze captured the moment and shared it on social media.

This comes weeks after he disproved claims that they were involved in marital crisis
Annie’s Instagram account was reported to have been the trigger for these claims. Annie however countered this by saying there was an Instagram glitch that reduced her number of followers and those she’s following.

Check out the video below.
In Celebrity marriage news, Judy Austin (Nollywood actress and second spouse of actor Yul Educhie) has offered words to pray for jobless people who, she said, are angry or frustrated.

The thespian posted an adorable video of herself on Instagram Tuesday, June 21. She used it to pray for the jobless.