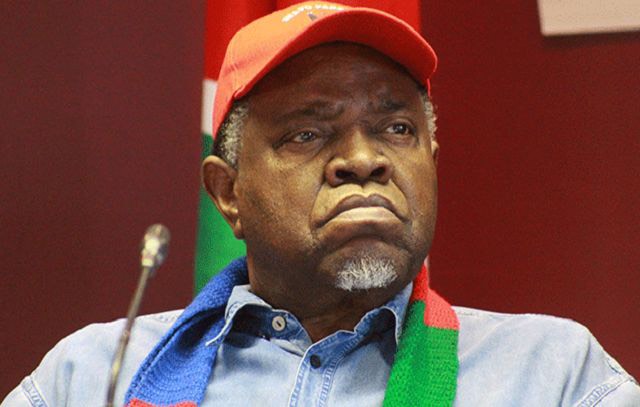 Shame on you – Geingob – The Namibian

President Hage Geingob said that some Swapo members are ashamed to be associated with ruling party.

“Shame on you if you are trying to be ashamed,” Geingob said at the Swapo central committee meeting held in Windhoek on Saturday, where he also claimed that the media is trying to make some Swapo leaders look stupid.

The central committee meeting will discuss, among other things, the possibility to amend the Swapo constitution, which could shape the succession fight at this year’s electoral congress.

The Fishrot corruption scandal has tainted the ruling party. It includes allegations that public funds were used to finance Geingob’s party faction, Team Harambee, and to buy votes.

Geingob encouraged Swapo members not be guilty of supporting the party.

Geingob also took aim at Swapo’s critics, such as the Popular Democratic Movement (formerly known as the Democratic Turnhalle Alliance or DTA), and certain sections of the media, for allegedly working with the apartheid government.

“The truth is we fought for this country while some of them were collaborating with the boers. They talk too much. Where was DTA … somebody from DTA calling people sell-outs and puppets,” Geingob said.

He stated that he was tired of Swapo members being ridiculed by the public for making political statements in order to make them look stupid.

Public comments at rallies have been criticized by Swapo leaders in recent months.

This includes claims by Jerry Ekandjo (ex-minister), who claimed that Namibia’s flag belonged to Swapo.

Saara Kuugongelwa–Amadhila, prime minister, was quoted by the media this month as saying that Swapo should be allowed to continue in power until Jesus returns.

Geingob considers that a political statement.

“When we make political statements, we are ridiculed as if we are stupid, we are educated,” Geingob added.

He stated that other political parties are not criticized for making ambitious statements like taking over the government following the 2024 national election. “That’s nonsense,” the president said.

“Freedom of the press you are enjoying. We fought hard for it. Where were some of you … with the boers,” Geingob said.

“I’m getting tired of this. You should be the one to be ashamed of your history is rotten, collaborators.”

Embarrassing botched up organization of Mediterranean Games Oran 2022 – The North…

Outstanding players, coaches to be awarded

Embarrassing botched up organization of Mediterranean…

Youth challenged to participate in Gonga the game –…