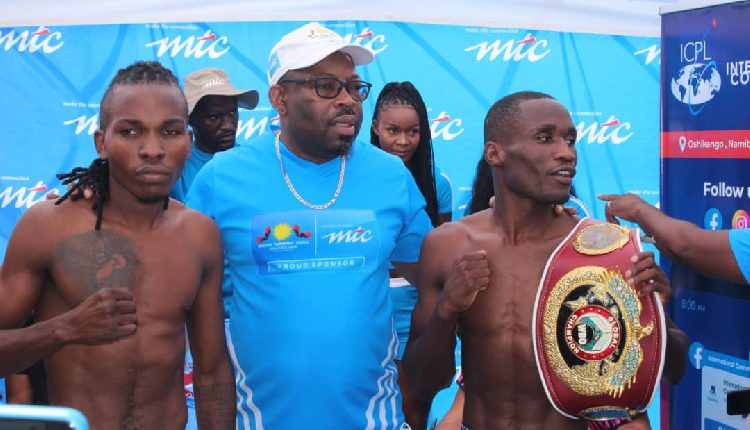 Chino loses out on title – The Namibian

SAID Chino from Tanzania cannot be crowned WBO Global Super Bantamweight Champion, even though he defeats Philipus “Energy” Nghitumbwa at Helao Nafidi Saturday after the challenger failed make the weight.

This means that the final continental title clash of MTC Sunshine Together As One VI bonanza is now a regular international bout.

“The fight will go on, but if Chino wins, he will not get the belt and the title will become vacant. But he will get a rating,” says Janine van Wyk from the Namibia Boxing Control Board.

The bill’s remainder was unaffected by such concerns, and all title fights were conducted as advertised.

The second continental title fight is scheduled at 22h10, when Jon Jon Ndjolonimus (13-0), defends his WBO Africa super-middleweight title against Erick Timanga (9-0), of the DRC. It will last 12 rounds.

Nestor Tobias, the promoter, said that the 13-fight bill will include three international title bouts and two national titles fights.

“We have arrived as we promised. Namibia has achieved history with the line-up of three international titles fights and two nation title fights on the one card. We want Namibia to continue to have all the international champions in their fights. It will be a good night for boxing,” he says.

In the fight for national supremacy Bernard Bernard (6-0), takes on Emmanuel Mungandjela (16-3-1), for the national welterweight title. Elson Kalu (3-1-1) and Paulus Amavila (8-1-1) are fighting for the junior welterweight belt.

Statement: The Kingdom of Morocco highly appreciates Spain’s positive positions and constructive commitments on the issue of the Moroccan Sahara – African Business